Four Steps to Manage Conflict in the Workplace

Solve More Problems Sooner and Better Than Other People Do

You are in your job for one reason: to solve problems, which often means people problems.

Business life is made of problems—and thank goodness for that! Interpersonal workplace conflicts truly are opportunities. They’re the vehicles for learning, growing, and proving yourself on the job. The good thing is that the sooner you manage one conflict, you free yourself up to proceed to the next one.

In reality, a job is a to-do list and game plan interrupted by people problems. Few days unfold trouble free. A phone message or e-mail brings an unplanned-for, unanticipated crisis. While dealing with that issue, another message or a colleague comes in with another new dilemma. It goes on incessantly throughout each day and into the next.

Doing a stellar job means you manage conflicts.Here are four steps to take when approaching conflict in your workplace:

Problems range in size and intensity, but generally speaking anytime you have a difference between what you have and what someone else wants, it’s a problem. It needs to be dealt with in an analytical, thorough, and logical approach. Don’t be caught off guard by incessant tribulations. Assume something will go wrong.

This is not negative thinking, it’s preemptive. If you anticipate the possibility you won’t be stunned and caught off guard. Ask yourself, “What could happen to mess this up?” If you don’t consistently pose that question, you aren’t doing the complete job.

Count on the probability that the worst thing will always happen at the worst time. If you expect things to get messy, by anticipatory thinking and action, you can keep them from getting messier.

In fact, if you want to be known as a leader who achieves results in business, pray for tricky management conflicts. One Washington politician admitted in a private conversation that he always made whatever people problem presented look more difficult than it really was so he would look like a hero when he solved it. (No surprise in U.S. politics, right?)

Not all conflicts will be career changing. Some will just be flat-out tedious, but they still need to be solved.

When presented with a conflict instead of steering clear or denying it, a good first reaction bosses like to hear is some version of: “I’m on it.” “No problem.” “Consider it resolved.” You should camouflage a puzzled, confused gaze of perplexity or anxiety.

It helps to think about the conflict from the perspective of all people involved.

Say a water main breaks that forms a sinkhole on a city street. Commuters late to work are frustrated and irritated, and they pass those feelings along as road rage. Police and fire departments take extra safety precautions, causing more delay for the commuters and others. The local news agency gets to send the rookie reporter out on breaking news. Now instead of sitting at her desk texting, the rookie reporter gets her shot at airtime. Her mother takes to Facebook and Twitter to brag. Since there is water damage on the cars in the streets, repair shops prepare for a bump in business. Insurance companies gear up for flood damage claims. The city maintenance crews who inspected the pipe last week worry about their job security and even legal liability. The lawyers anticipate the lawsuits. Kids are happy because they can’t go to school. The pest control people gear up for rodent removal. The city council members call for an emergency debate on the city’s infrastructure plans. Candidates for the upcoming city council election seize the vulnerability and change their speech for the Optimists’ lunch. The water pipe manufacturers scurry to get the right gauge in inventory. Long-haul truck riders get to pick up unplanned loads, bringing in extra money for their kids’ braces. The ducks get a new pool to paddle around in, at least for the day.

My point: a seemingly small conflict can have so many dimensions that many other people experience the ramifications beyond your initial evaluation of the situation. Managing conflict means dealing with the situation from the perspective of others involved, not just your part. It’s a version of doing 110 percent versus 100 percent.

Conflicts have a lot of dimensions so it’s a must in your decision making to ask questions and consider the perspectives of the wide range of people involved—the externalities. Doing so will help you come up with an analytical, thorough, logical, and hopefully non-emotional resolution. Ask questions like these as part of your conflict management strategy:

Try any other question that starts with who, what, when, why, or where.

Sort out the facts from the opinions that you get. Remove your own feelings as much as you can. Break the issues into attackable, doable parts instead of trying to tackle them all in one fell swoop. Remove any bottlenecks you can.

Write down all the possible options because you elaborate, concentrate, and evaluate more objectively in print than you can just in your head. Weigh the choices; mull over the plusses and minuses. Pull the best solutions from the list. Test them if you can. Contemplate the consequences of both the solutions you chose and those you didn’t choose. Decide on which are feasible. Keep asking, “What could mess this up?”

Occasionally step away, get a clear head, regroup, and go back in at a different angle when you re-engage. Set a deadline for each step; it will cause you and others to scramble. Have a plan B if things prove to not be wholly solvable. Present recommendations or resolutions in a concise, clear manner. Stand on them unless or until additional information causes you to change your mind.

If you wait until you can do no wrong in solving the problem, you’ll wait forever. Nothing will ever get done. Expect potential or additional problems to pop up around your decisions. Remind yourself that your ability to deal with, overcome, solve, go around, and eliminate is your job—and it’s what makes work life interesting. The sooner you solve one conflict, the sooner you can go onto the next one.

Most importantly, don’t take conflicts to your boss. Take solutions. Why let him have all the fun?

The business problem-solving techniques you hone will carry over to your personal life. Some CEOs relayed to me stories of preventing potential personal predicaments by following the advice one EVP gave me: “Correct the problems before they occur.” That strategy was evident in many stories CEOs told me such as these:

Pursue Conflict: Do more, and do better

Instead of trying to get comfortable in your job, try to get constantly uncomfortable. Seek out problems, look for potentially painful experiences, approach the scariest people, juggle more balls than most people handle, and put an extra percentage of “umph” into everything you do.

You will likely find that you can do what you never thought you could. Here are some CEOs’ versions of doing more early on in their careers:

“I specifically looked for conflicts in areas where there seemed to be no resolution—or slothful, stupid resolution.”

“After resolving a conflict, I always offered to work for a month for free on that person’s pet project. I learned some new areas and they got to save face.”

“I discovered that managing conflict wasn’t just solving a problem with a single person on a specific day. It was every day effort on little things to keep conflicts at bay. It is simply doing the little things that others aren’t willing to do…and not just when you feel like doing them but the whole time.”

“It’s trite, but I try to be more informed, work harder, quicker, and hopefully smarter than my peers…and with no higher priority than to anticipate and resolve conflicts.”

If work opportunities aren’t coming fast enough, go find them. If you risk and fail, you’re still further ahead in learning than those who didn’t try.

When you “do more,” make sure it’s what management wants and needs. Keep your boss in the loop. It’s unproductive to do more when it’s something she doesn’t want done.

Don’t jump on or jump into someone else’s turf even with good intent. Communicate with the people involved, and ask lots and lots questions. No detail is too small to learn about if it matters to your boss or the team.

Doing more involves building goodwill upon goodwill. So if you take care of 90 percent of a conflict today, tomorrow you start from that 90 percent point. But if you got to a 100 percent or, better yet, 110 percent today, that’s where you start off tomorrow. You build exponentially, and that is a huge differentiator, always being steps ahead of others in the same time frame.

At all times think about how you can do your job better, provide more value, and expand your impact on the organization—within the realm of what is needed and wanted—in a harmonious fashion. Don’t storm in telling the CEO or other leaders what you want to do. Solicit what their needs are around the situation:

2) When you see a need in someone else’s turf, go to the person and ask questions such as these to avoid conflict in the workplace:

“I have an interest in _____. Is there some way I can be of assistance? You can talk to _____ and see what I’ve been doing around this kind of project that could benefit you.”

3) When an idea is suggested that means extra work for you in resolving the conflict, say, “Can I take a shot at that?”

To manage workplace conflict: do more and do it better. In working harmoniously with people, you’ll find that it’s not that difficult.

It’s easy to go to work when you don’t fear conflict. You’ll end up as Warren Buffett says, “singing on his way to work.”

Enter below to win a copy of Debra's newest book Executive Presence For The Modern Leader and sign up for her email list. Three winners will be chosen May 12, 2021. 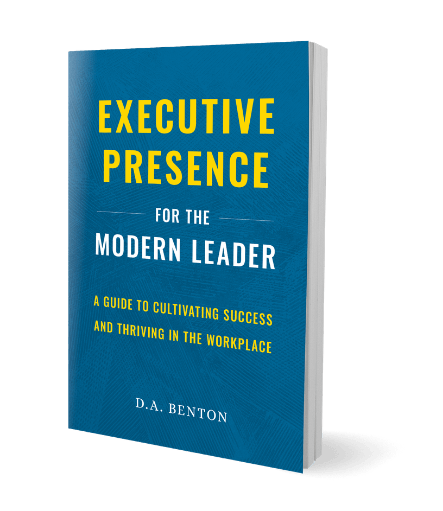