Want To Improve Effectiveness At Work? Try Slowing Down 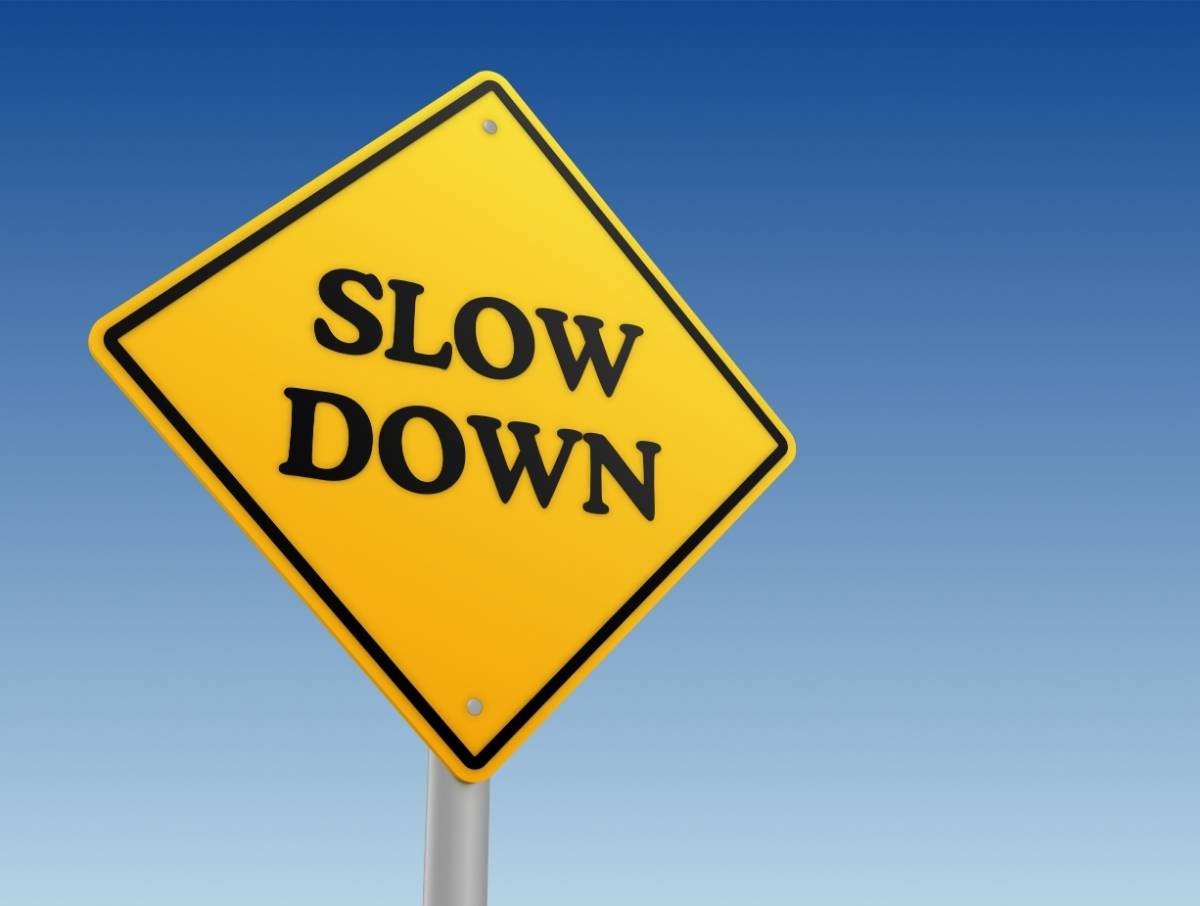 If you want to improve effectiveness at work, start by slowing down instead of speeding up.

I was in a meeting with two executives discussing group training for some of their managers and department heads. Suddenly, a woman burst in to inform one of the executives about a change in appointments.

With rapid-fire words, she explained the schedule change. Then as quickly as she had come in, she was gone. I asked, “Is she the assistant to one of the managers I’ll be working with?” They smiled and said, “No, that’s who we report to!”

Boy, was I wrong! My opinion was based on her appearance as a hasty, nervous-looking person who zipped in and out with hunched-over posture. Her demeanor and bearing said, “I’m not that important and I really shouldn’t be here, but…”

Men and women up and down the ladder must slow down for efficiency and effectiveness.

Men and women up and down the ladder must slow down for efficiency and effectiveness.  @debrabenton in "Want To Improve Effectiveness At Work? Try Slowing Down" Click To Tweet

Don’t be quick, fast, or in a hurry all the time. Be unhurried (within reason, of course).

To improve your effectiveness at work, you want to be markedly unrushed. Slow down when you talk, walk, respond, ask a question, enter a room, shake hands, and leave a room. Be confident enough to take time. Move only when necessary.

If you slow down, you’ll go a lot faster.

Harness Your Energy To Improve Effectiveness At Work

Harness your energy. One executive I know says he tries to “start out slow and taper off.” It’s difficult to achieve mastery when you’re in a hurry.

Slow down so you don’t stumble and so you don’t leave gaps. When you rush along, you are likely to miss important details. Be quiet so you can see and hear more. Plus, when you talk and move fast, it’s hard for people to absorb what you’re saying.

A client from a software company told me this story:

“I always speak fast – on the telephone, in person, giving speeches – all the time. But I was in Germany recently and had to speak to a group through an interpreter. After every sentence I spoke, I had to pause and let the translator restate what I said. I was slower than I had ever been in my life. It made me very calm. My English-speaking manager came up to me later and said it was the best speech he’d ever heard me present. Many people in the audience came up and congratulated me also. Now when I speak, I just imagine someone is translating my words into their language and I slow down to let them catch up. I’ve found I’m much more effective.”

What Does It Mean To Slow Down?

Slowing down does not mean putting on the brakes, being lethargic, or squelching your energetic spirit. It means pacing.

Pace yourself at work so you are fast enough but not frantic, so you have a quiet speed that makes you relaxed, calm, and trustworthy. Talk at a slowed-down pace, but think fast.

Speed tends to make you appear unsettled, upset, flustered, confused, and suspicious. The actions of effective people do not seem rushed.

Slowing Down Makes You Seem More Confident, Competent, and Trustworthy

The more time you give yourself, the more status people give you.

Quick, jerky motions make you look nervous. Pause as if you mean it and don’t let other people take you out of your calm.

One of my coaching clients told me, “Our CEO has a distinct sense of self-containment. He’s never in a hurry, but he’s still a beat faster than most people.”

Your composure will be contagious. People will ask you fewer questions and challenge or attack you less when you’re calm and slowed down.

As people around you speed up, try the opposite- slow it down. A lot of people believe the busier they are the better they are. But if you want to be memorable, impressive, credible, genuine, trusted and liked, don’t “run around the track” for anybody.

The more time you give yourself, the more status people give you. Want To Improve Effectiveness At Work? Try Slowing Down Click To Tweet

How To Improve Your Effectiveness At Work While Simultaneously Slowing Down

To get things done more quickly while slowing down, ask yourself, “If I had to leave town tomorrow for a month, what three things would I need to get done?” Do those three things.

Controlled reaction thinking is the goal. Slow down your body, feet, and hands. Quick thinking is necessary, but pace your physical response.

For practice, do a silent drill. Rehearse in your head what you’re going to say. Listen to how it sounds. Then speak accordingly.

Slow down, let people wait a little. Whatever you say or do will be valued that much more.

Try to do this silent drill at least once a day. By the way, this is incredibly difficult to do. We just blurt things out 90+ percent of the time. According to UPI, some cognitive scientists believe we do this because we don’t understand what we are saying until we say it.

But if you don’t understand what you’re saying, how can you expect others too? Rehearsing what you’re going to say beforehand will make what you do say more powerful.

You don’t want to be viewed like one client, who was sent to me for coaching with this description: “He thinks he’s so thoroughly trained he doesn’t have to think before he speaks and acts. I can’t trust him, he’s so fast.”

You see, 95 percent of business is waiting; waiting for the opportunity to do the right thing. If you’re going through life too fast, you’ll miss the chance to execute well. Want To Improve Effectiveness At Work? Try Slowing Down Click To Tweet

The Value Of Slowing Down

You won’t be boring, listless, tedious, or lazy if you slow down. Instead, you’ll be doing things purposefully, like you intended to do it that way.

Slowing down requires patience, then acceleration, then patience. You see, 95 percent of business is waiting; waiting for the opportunity to do the right thing. If you’re going through life too fast, you’ll miss the chance to execute well.

When you slow down and think before acting, you align attitude and action, and you appear calm and confident. You’ll feel more composed too. When you appear calm, people think you know what you’re doing. They think you must be right. They are much more likely to listen and follow you. All it takes is a little less hurry from you.

If you could use guidance in how to slow down or want to improve executive presence and ability to work with others, I am here to help. Contact me to discuss executive coaching, or if you have a group of emerging leaders, for a speaking engagement.

1 thought on “Want To Improve Effectiveness At Work? Try Slowing Down”